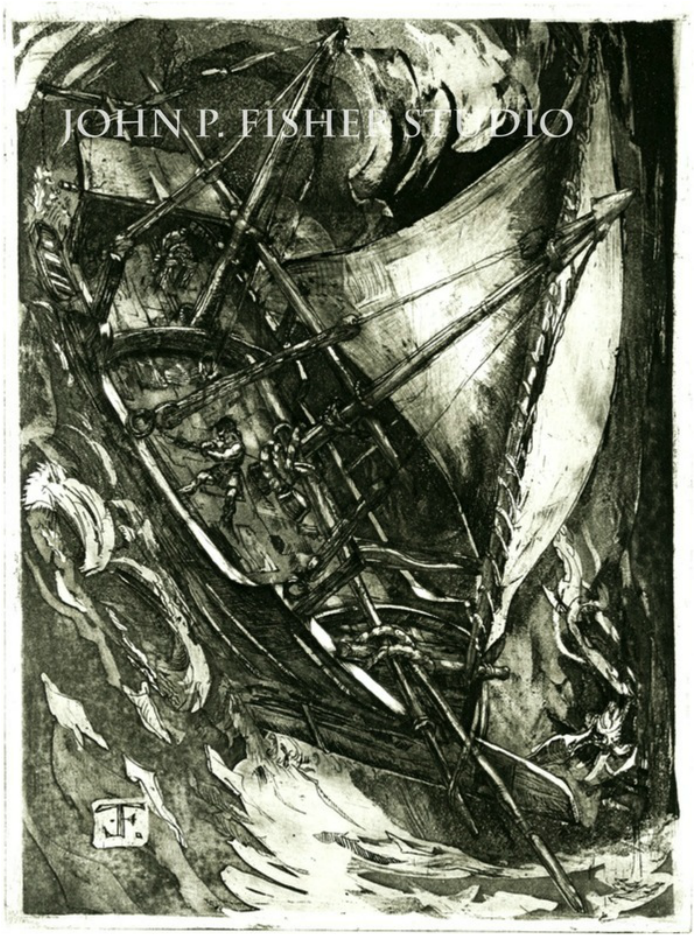 This boat is a Middle Eastern Dhow. They are an ancient style that are still being used. "Wooden Boat in Distress" shows a Dhow that has been caught in a storm and is being overtaken by a large wave. Will the crew survive? During these troubled times some things stay the same all over the world. The danger to sailors is captured in this print.

"THE NEW ORLEANS BUS"
Color Woodcut using the Reductive Method
Image Size: 15 x 22.5"
Edition of 5
Only this one is remaining 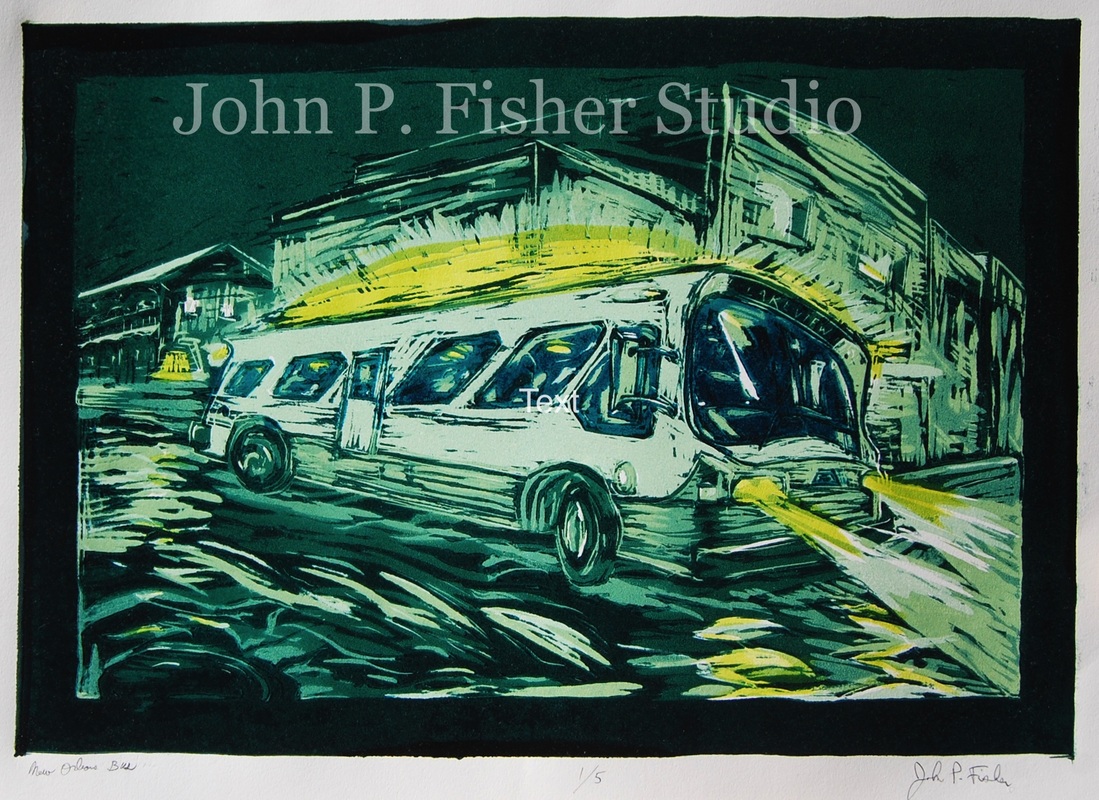 Here is a New Orleans Municipal bus from the 1960's era. For only about 35 cents I could get anywhere in the City. These buses were an oasis from the humid, tropical air of New Orleans. Strong fans blew cool air on you as soon as you entered. I've indicated the different climates by making the color inside the bus bluer than the more greenish exterior. This is fun, yes? I lived in the Lakeview area of New Orleans as a boy. 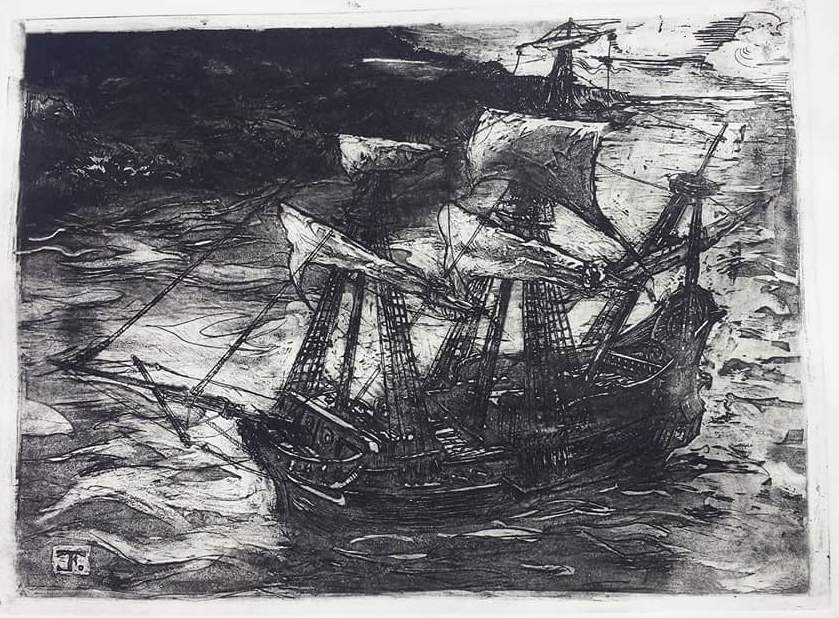 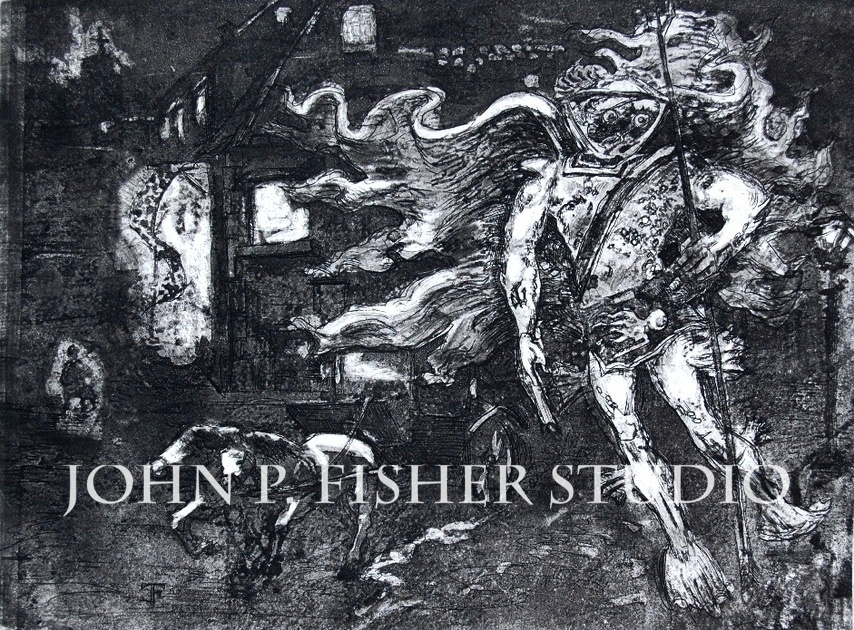 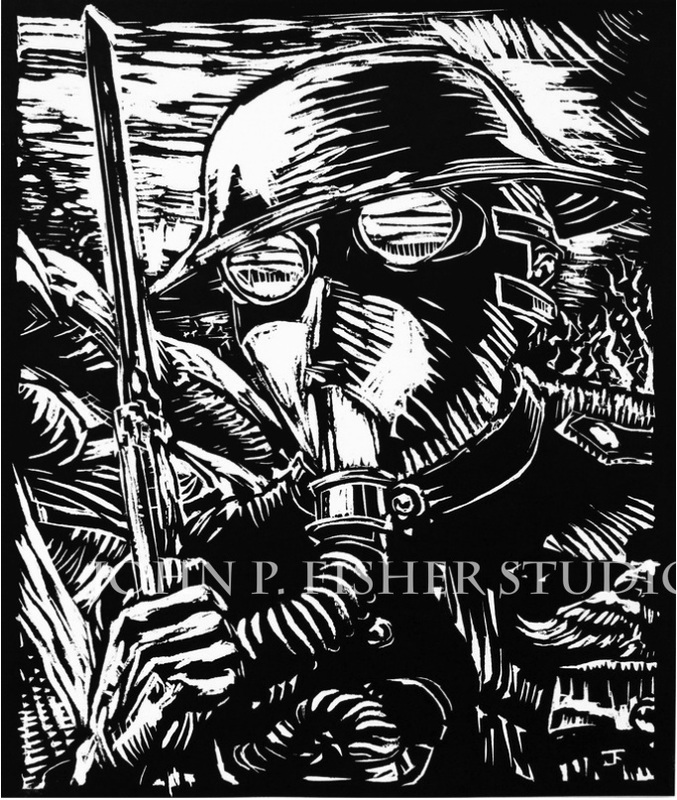 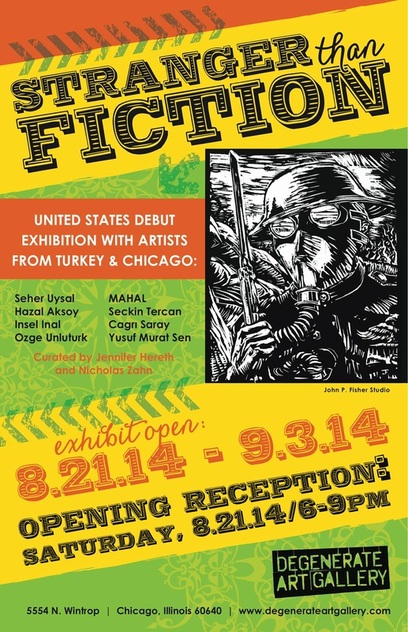 My WWI soldier was selected by Degenerate Art Gallery of Chicago to appear on a poster. The name of the gallery, it should be noted, is based on an exhibition sponsored by the Nazis to display all that was wrong with the modern art of the time! The art show was meant as a harsh slap in the face of the modern artists of that era. For example, Otto Dix, a founding member of the German Expressionist movement comprised mostly of German combat veterans  of WWI, was among the artists snubbed at he show.

This really highlights how twisted and intolerant Hitler was. Being associated with the Degenerate Artists is a honor!
"Blue Dragon"
Fountain pen processed in Photoshop
​not for sale 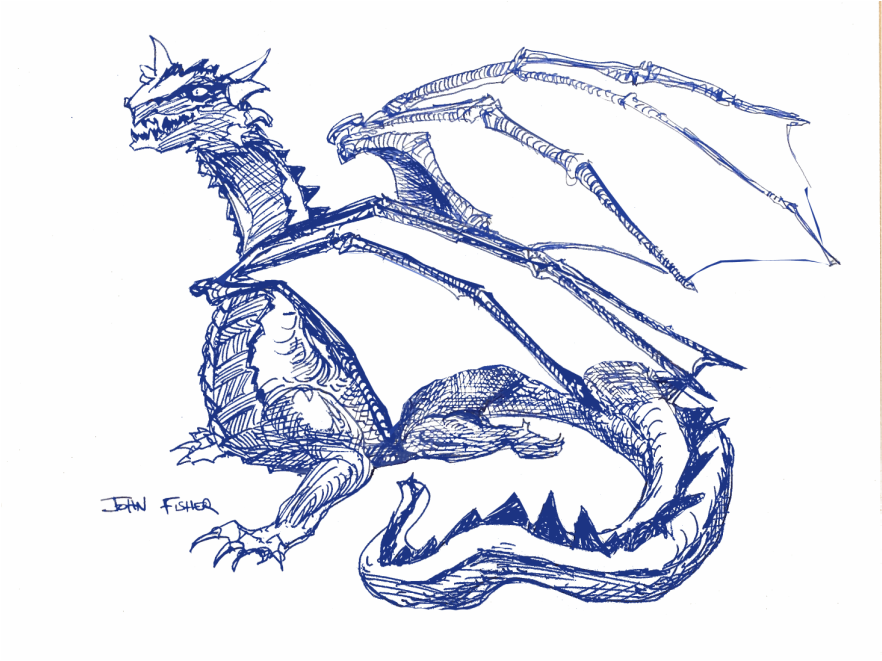 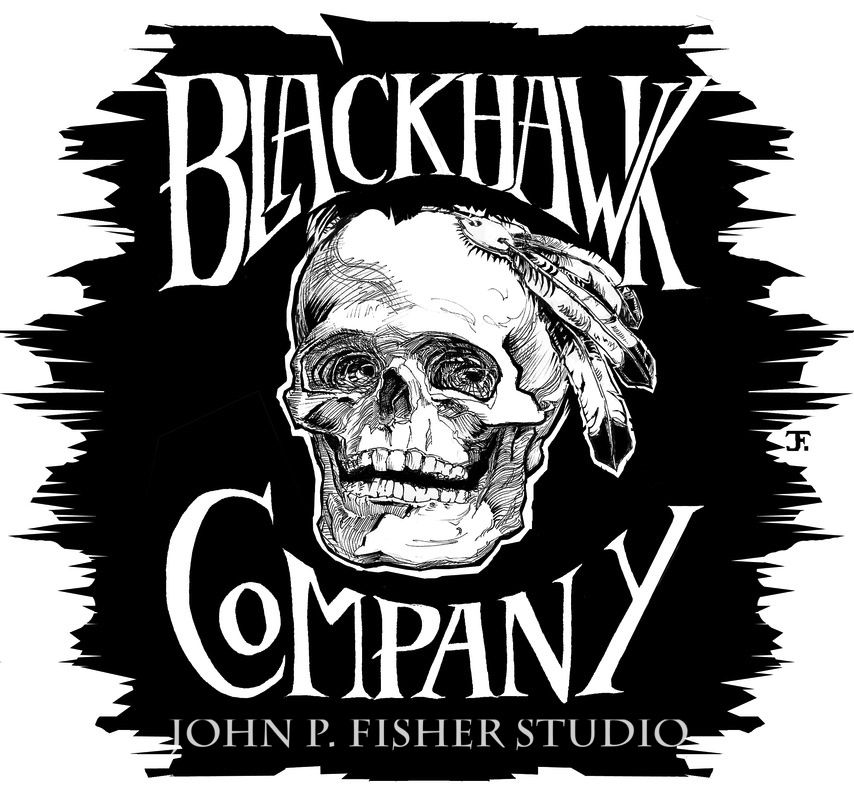 This handsome fellow is the logo of my Son-in-Law's former unit, Bravo Company, 2/87 Infantry. I drew if from a plastic skull that I've had for decades.  My college roommate named him  "Eugene", after Eugene Delacroix. This drawing illustrates how my lines seem to closely hug the inner and outer curves of the surfaces. This is my forte. 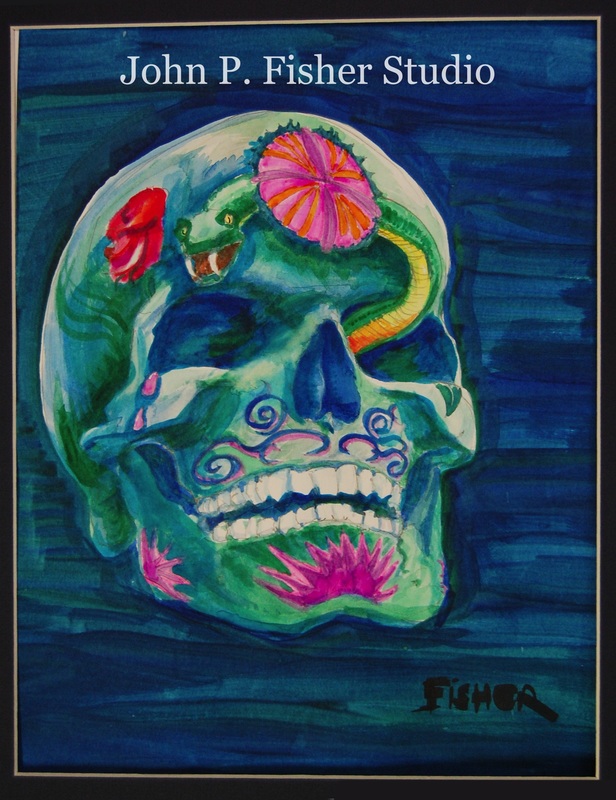 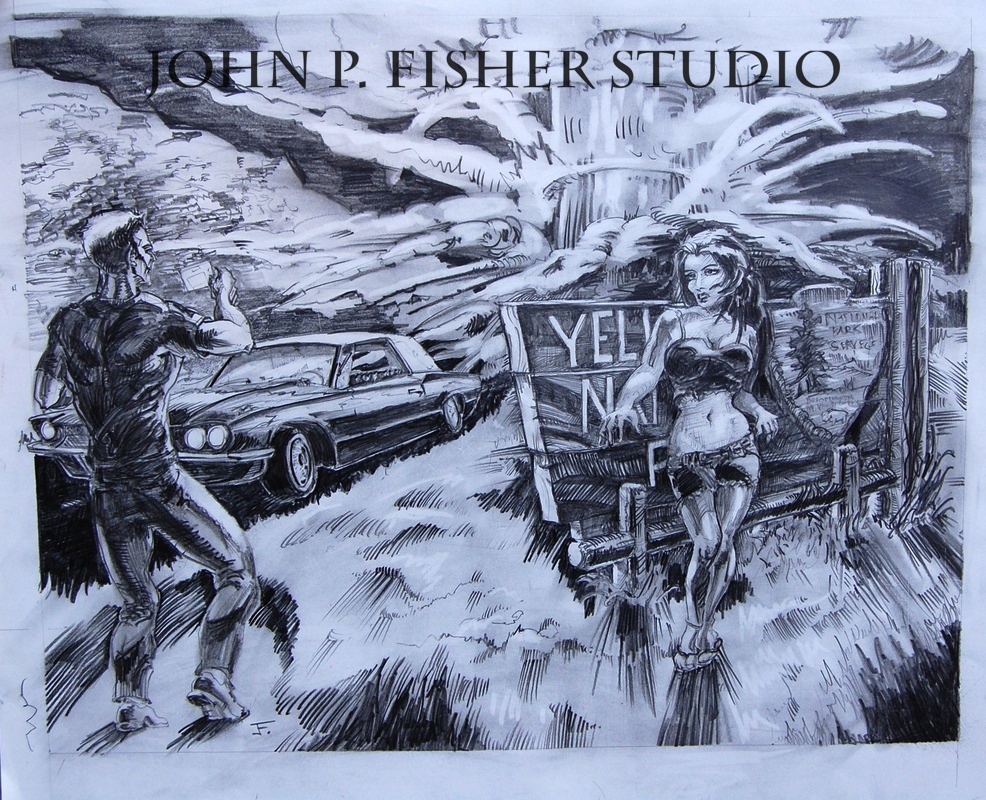 This happy couple is about to be vaporized by the exploding "caldera" under Yellowstone National Park. You just never know what the day will bring. 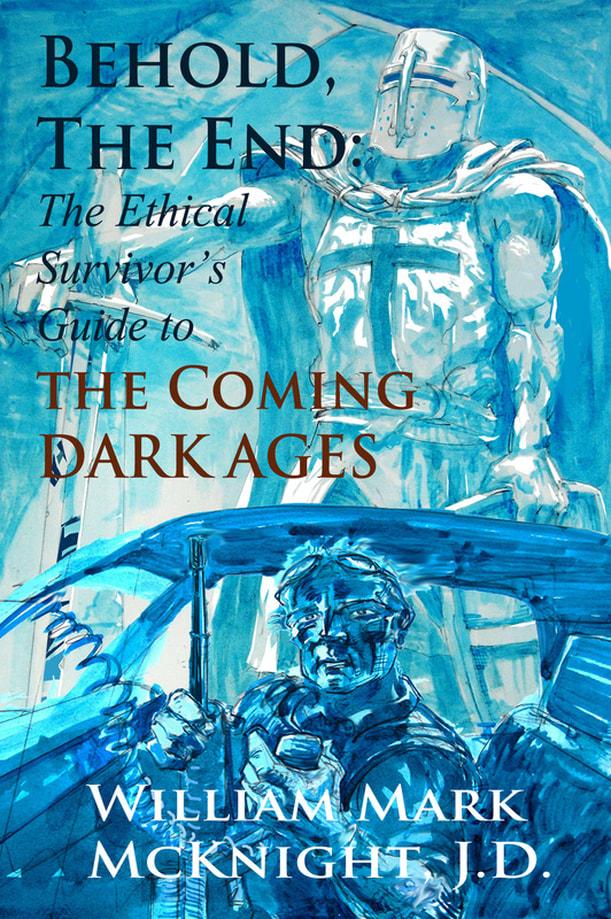 This is my first Book Cover, done for a great friend that I served with in Iraq.  He's become a writer. His book is not yet published. We are working on another book anyway. 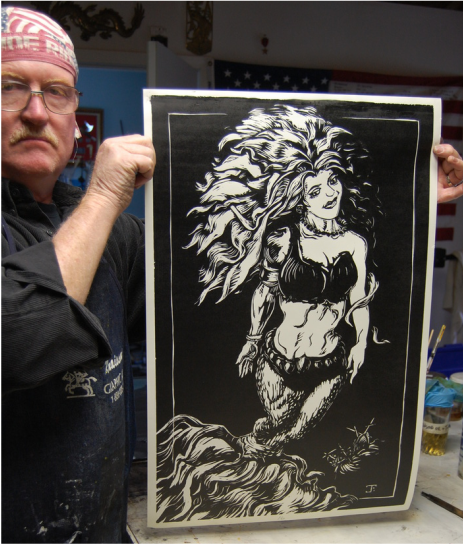 I drew her first on a dry-erase board in front of my elementary school art students. It got such a great response that I gridded the original and transferred her to a block.

This print is a departure from my usual foreboding and somewhat gloomy images. I like her cheerfulness and upbeat expression. Also, she gave me the opportunity to showcase my figure drawing know-how. 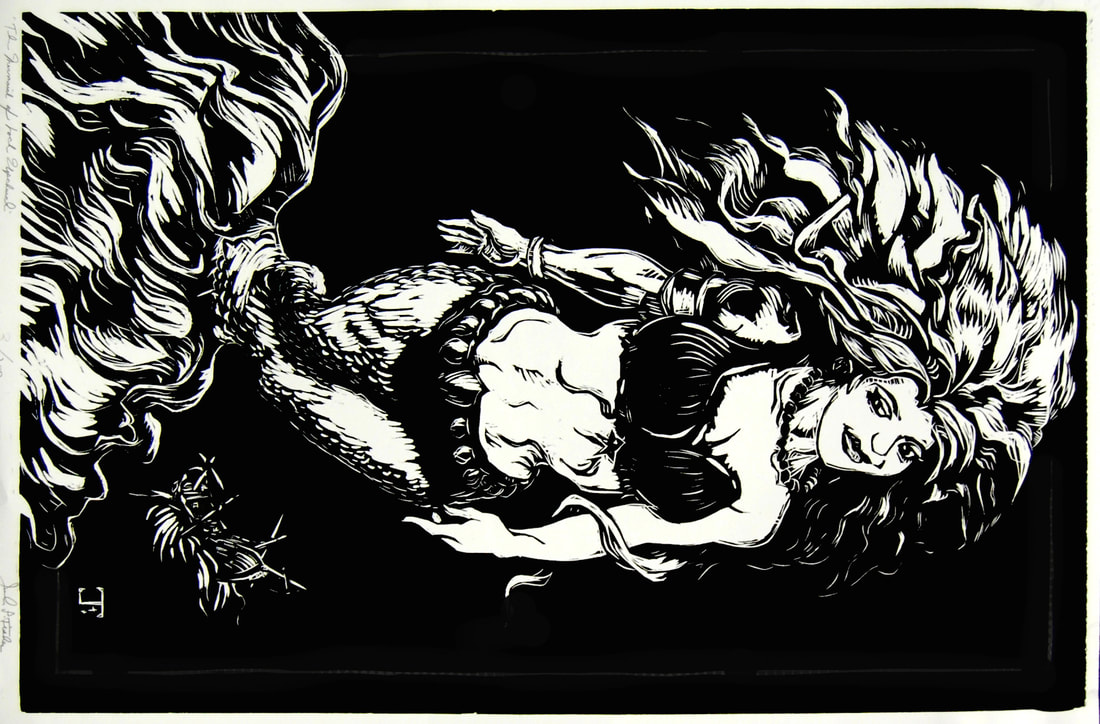 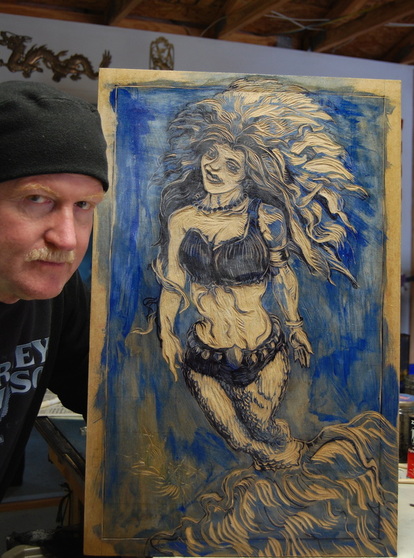 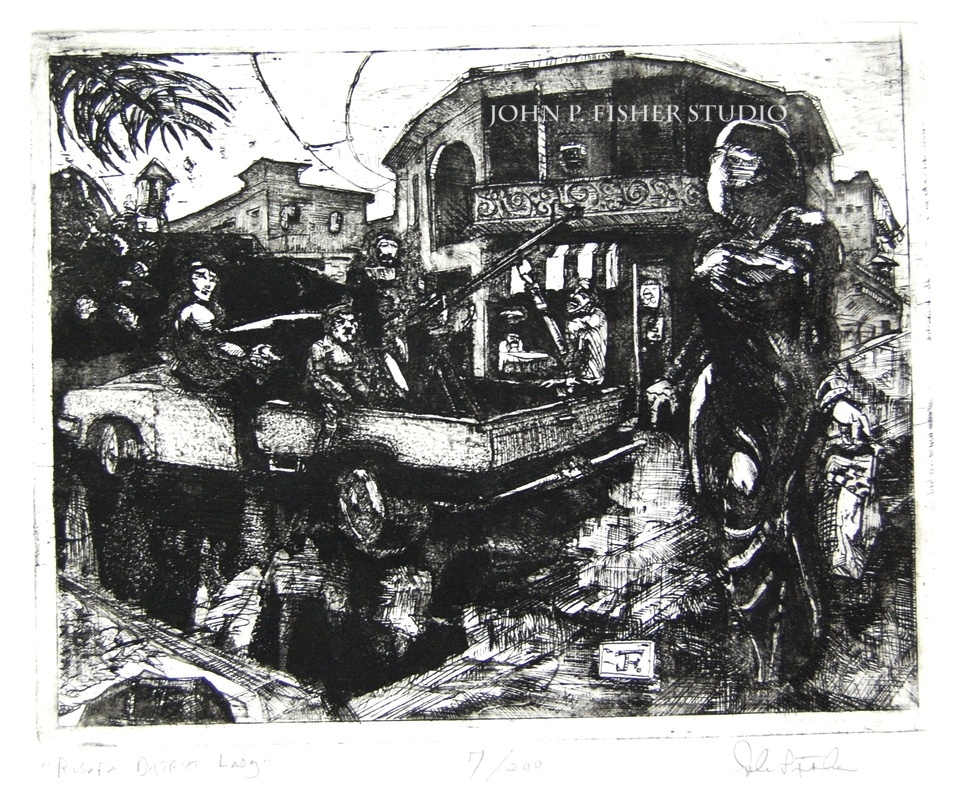 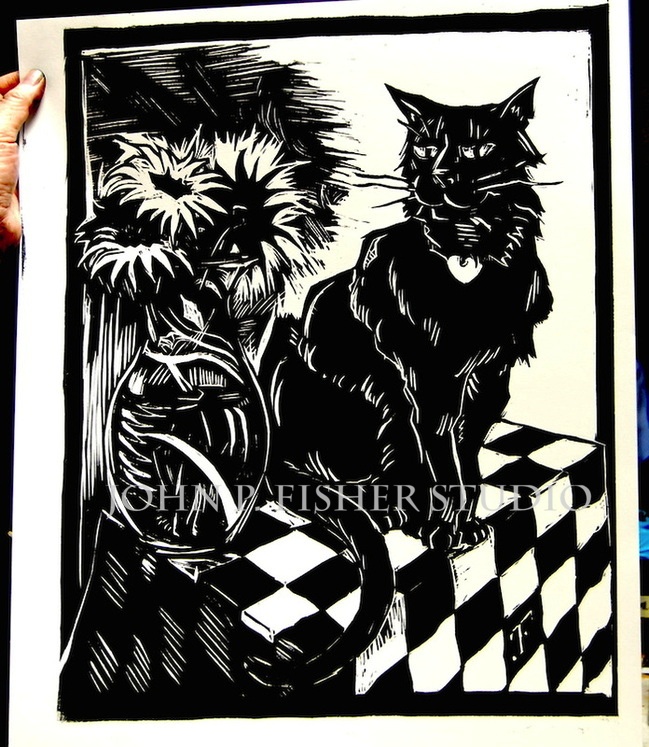 Cats are cool. So are dogs. This is a fun departure from the normal dark and stressful scenes I often create. 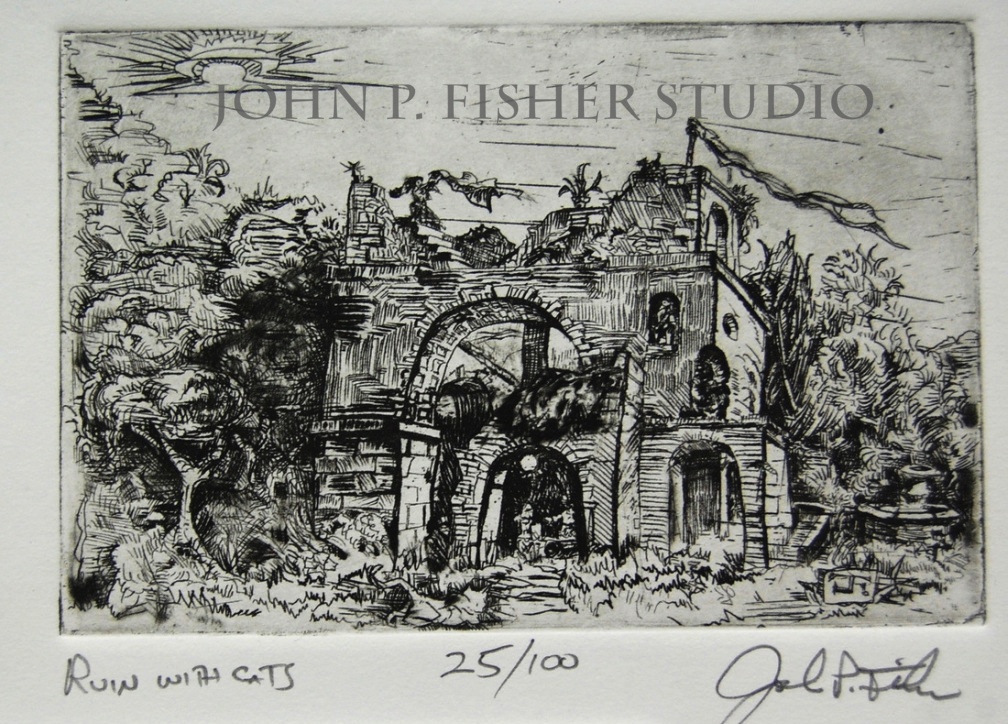 I experimented with this copper plate over the course of a year or two. Many of the prints are quite different, as I tried out new techniques, new tools, a different concentration of the Ferric Chloride solution, etc. As different as they are, all still have a certain charm. 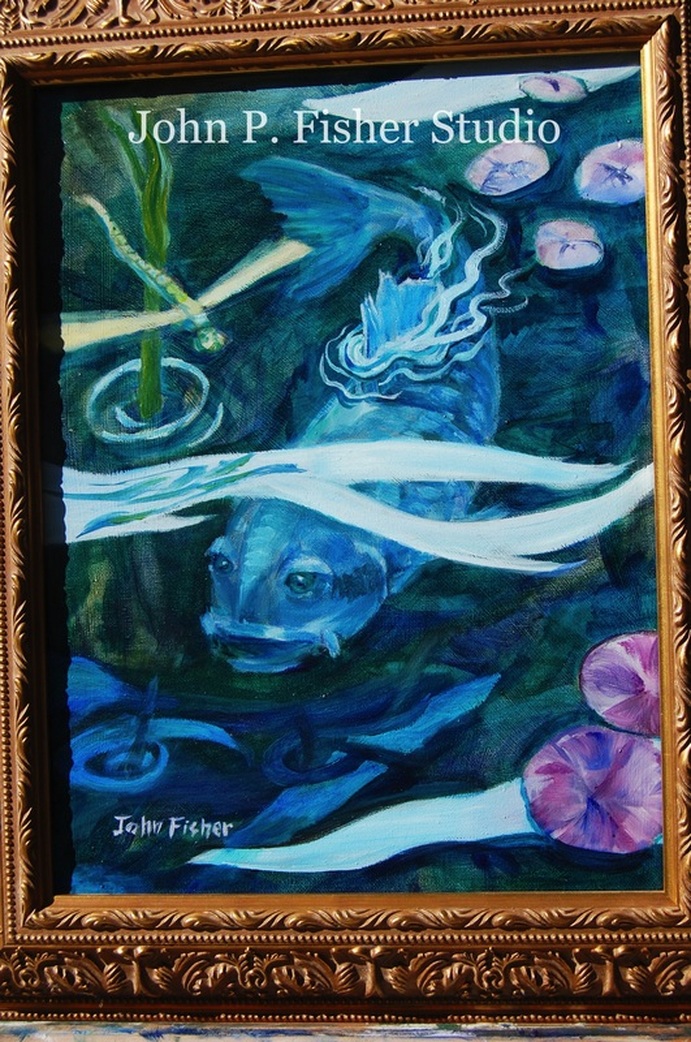 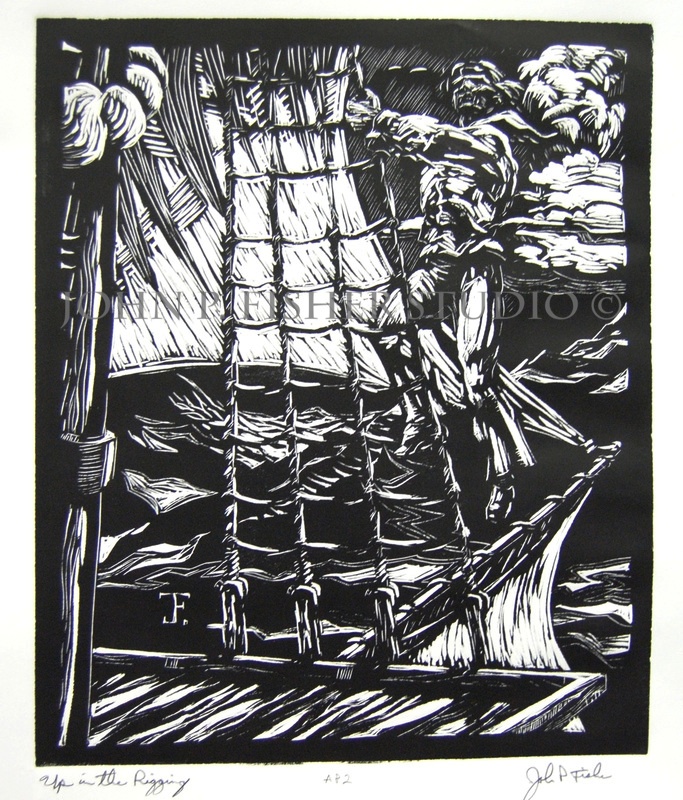 I did this while making "Wooden Boat in Distress" and "Wooden Ship#2". Here I wanted to spotlight the crewmen who operated the old ships. Around this time I visited Mystic Seaport in Connecticut and climbed around on a few of them. The details were fresh in my mind.